Whether you’re an amateur photographer or a pro videographer looking for less expensive equipment, these two tripods from Magnus have a lot of satisfied customers. Let’s look at them both and see which one will be best for your needs. 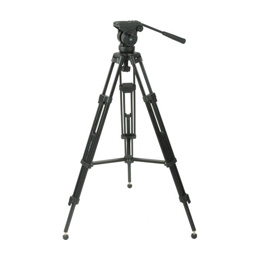 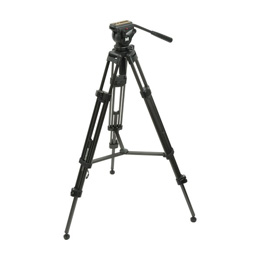 The VT-3000 is made for cameras weighing up to 6.6 pounds, so that means it supports a wide range of consumer cameras, DSLRs, and camcorders.The quick-release plate has a ¼” screw, a video pin, and a micro balance slider. The plate has a somewhat different design where a person has to turn a knob and push a button to remove the camera—so maybe not exactly “quick-release.”

With the legs opened the tripod’s operating height is between 28.6 to 61 inches, so it reaches two inches higher than the VT-4000 that we’ll look at later. There’s a middle spreader to make it more stable. It also has metal spiked feet for use outdoors and retractable rubber feet for indoors. Some users have complained that the leg locks start to fail after a couple of years of regular use.

This tripod setup features a fluid head which is an excellent choice for shooting video. The head is a 65mm half-ball mount with a fixed counterbalance spring. There are separate controls with locks for pan and tilt, and a bubble level. There are pan bar mounts on both left and right sides.

In summary, this is a decent tripod with some convenient features like the microbalance sliding plate and the bubble level. It’s not the smallest or lightest for travel, nor is it made for heavy-duty use. If you’re filming a wedding, a local sports event, or just having fun, this might be the tripod for you.

More features of the Magnus VT-3000

Magnus designed the VT-4000 to hold up to 8.8 pounds of equipment, more than the limit on the VT-3000. It’s got some features that push it more into the pro range over the VT-3000 and it’s better for shooting video.

For example, in the fluid head there’s a fixed counterbalance spring set to 3.3 pounds. The slide range of the plate is +20/-25mm. It has adjustable tilt drag with a tilt range between +90 to -60 degrees. Both pan and tilt have locks, just like on the VT-3000. But with the VT-4000, Magnus includes one pan bar in the box. Unfortunately for some left-handers, the controls for the head are on the left side so the user must control the pan with their right hand. At least the quick-release plate is actually quick to release, unlike the one on the VT-3000.

Like the VT-3000, the VT-4000 tripod has a middle spreader for stability and flip-locks on the legs. There aren’t many complaints about the flip-locks failing. For use in multiple terrains, it has both metal spiked and rubber feet. It weighs a little bit more than the VT-3000 but it stands a little shorter when fully extended. Keep this in mind if you need to be above the action to get the shot.

More features of the Magnus VT-4000

The first thing to think about is whether the tripod you want will support the weight of your equipment. The VT-3000 handles up to 6.6 pounds and the VT-4000 up to 8.8 pounds. Professionals recommend a weight capacity at least one and a half times the total of your camera and lenses. Most consumer DSLRs and camcorders are less than 3 pounds so either tripod could handle them. Consider the VT-4000 if you have heavy lenses.

Second, comfort is important if you’re spending a lot of time behind the camera. It would be best if the height of the tripod with the head attached reaches to your jaw or higher. The VT-3000’s maximum height is two inches taller than the VT-4000.

Finally, keep in mind that the head on these two tripods is not removable. The head on the VT-4000 offers a few more features for shooting smoother video.