As an Amazon Associate I earn from qualifying purchases.
Home
Camcorder Reviews
Zoom Q2n vs Q4 vs Q4n Review

When they think about camcorders, most people would put more value on the image quality over the sound. But that’s not the case with Zoom’s video recorders. They are made especially for musicians who want to make videos, and fans who want to record shows. As a result, they emphasize the quality of the sound they capture. Let’s explore the top features of these three handy recorders to see which one is the best for you. 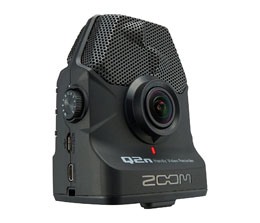 The highlight of the Zoom Q2n Handy Video Recorder is the large XY stereo microphone on top. This mic can handle a sound pressure level up to 120 decibels. That means you can record the next concert without clipping in the audio.

Right below the microphone is a camera lens. But you can turn off the video recording to simply capture sound and record it to a WAV file at 24-bit, 96kHz resolution.

Should you decide to record video, the camera lens has a fixed 160-degree wide angle view with a F2.0 16mm aperture. When recording, the camera saves video into MP4 format directly on an SD, SDHC, or SDXC card up to 128GB in size.

While you can’t zoom, you can choose from ten scene filters, or preset settings, for differently-lit environments. This is essential since many concerts are held in clubs, halls, or dimly-lit settings.

If you don’t want to fiddle with those options, just set it to automatic mode. You can also select from a variety of resolutions and frame rates, from 1080p HD at 30fps down to 24fps at 720p. The Zoom Q2n can record up to two hours of video while operating on two AA batteries.

One last note—the Zoom Q2n is very portable and compact for as much as it doesn’t look like a traditional video recorder. It only weighs 5 ounces and it measures 3.1 x 1.8 x 2.2 inches in size. 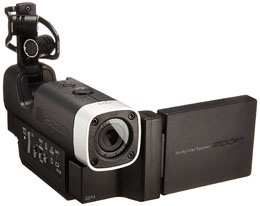 One look at the Zoom Q4 and you’ll see that it looks similar to a conventional camcorder except for the large XY stereo microphones on top. Once again this is a camera focused on capturing high resolution audio.

The mics record sound in WAV format at up to 24-bit 96 kHz quality, or AAC compressed audio from 64 up to 320kbps at 48kHz. Instead of filming video, you can simply capture sound. Since the mics resist a high sound pressure level, you don’t have to fear clipping. And when you’re done, the mics fold down out of the way for transport.

When you record video in MP4 format, the Q4 lets you choose either 1080p at 30fps or 720p at 60fps for slow motion video. The wide angle lens has a 130-degree field of view while the 3MP sensor does pretty well in low light settings. But you’ll still see more noise in video shot in dim settings than you would with a DSLR or professional camcorder.

Another useful feature of the Q4 is its ability to serve as both a USB microphone and web camera for a computer or an iOS device. Used in this way, you can livestream a broadcast, record a podcast, and more.

Since the Q4 has an LCD screen, you can monitor what you’re shooting. Or you can completely detach the screen if you like.

The built-in rechargeable battery lasts up to 3 hours, depending on the format you use to record. You may prefer to plug the camera into an outlet and run it off an adapter instead. And you can mount it on a tripod, a mic stand, or a guitar head. 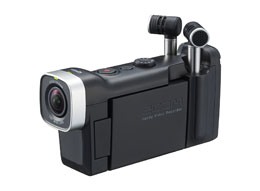 The Zoom Q4n also resembles a traditional video recorder, but it’s definitely focused on audio capture, not just filming. Its main highlight is the set of microphones on top. First, they resist up to 140dB SPL so you can use this camera up front and center at the concert. Then, they can be configured as either XY or AB mics. The XY configuration is best for natural depth while AB is good for recording wider stereo and reverberation.

Meanwhile, it does a good job recording video too. Like the Zoom Q2n, the Q4n has ten scene settings to handle different situations like “Dance Club” and “Concert with Low Lighting.” The wide-angle lens has a 160-degree field of view plus five levels of digital zoom.

When you record video, you can select from 5 HD modes and 2 WXGA modes, from 3M HD down to 30Mbps WVGA. And with audio, you can choose to record in either 24-bit 96kHz WAV or AAC. All of these settings are easy to manage with physical controls and the touchscreen monitor.

With specs like these, you can imagine that this is the perfect little camera for a music professional. And you don’t need to worry about running out of time or space when recording a performance. The Q4n is compatible with top brand SDXC cards up to 128GB in size, plus you can plug the camera into an adapter and run it off electricity if needed.

It’s a tough choice between these handy video recorders from Zoom. All three are champs at recording audio and do a good job with video too. They are simple to operate and are lightweight and compact for transport.

If you don’t like the limitations of built-in rechargeable batteries, get the Zoom Q2n. It runs off two AA batteries. But it’s also the one that least resembles a traditional camera and it has no preview screen.

If you want a video recorder that can double as a USB mic and webcam, check out the Zoom Q4. It’s very versatile.

And if you want a video recorder designed with music pros in mind, take a look at the Zoom Q4n. It can handle a high SPL of 140dB.

Click here to Check out Zoom Q2n Price on Amazon.com!

Click here to Check out Zoom Q4 Price on Amazon.com!

Click here to Check out Zoom Q4n Price on Amazon.com!