When you’re serious about recording top quality video, you need a camcorder. A DSLR or other camera won’t make the cut. These four models from Canon have proven their ability. Let’s see if we can help you decide between them today. 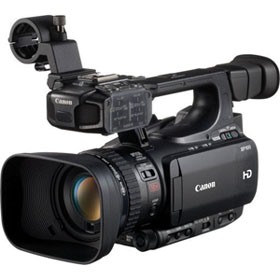 The Canon XF100 appeared on the market in 2011 and has had plenty of time to demonstrate its worth. It’s one of the most popular camcorders that Canon sells, partly because it’s lightweight and compact, perfect for taking on the road. The original battery lasts around 2 hours, but you can extend that time by using a different battery or the AC adapter. Also, the camera has two CF card slots for recording up to 600 minutes of 25Mbps footage with 64GB cards.

In fact, the XF100 can do relay recording, 3-second pre-recording, and hot swapping. It uses Canon’s own XF MPEG-2 50Mbps codec that is compatible with non-linear editing programs from Apple, Adobe, and Avid. Plus, the codec has 4:2:2 color sampling for better resolution than HDV and other 4:2:0 codecs. Reviewers have commented that the color accuracy is good even in low light. This is also due to the 1920 x 1080 CMOS sensor.

The lens on the XF100 has a zoom range of 30.4-304mm, similar to a 35mm camera. You can choose from constant and variable power zoom, with powered or dynamic optical image stabilization. Dynamic stabilization works well when you’re walking or running, and the powered mode is good for managing shake when you’re still, but at maximum zoom. Plus, the digital teleconverter feature extends optical zoom up to 6x farther.

It also turns out that the Canon XF100 gives you full control unlike consumer-grade camcorders. For example, the control ring on the barrel can be assigned to manage focus, zoom, or iris control. You can also set and store image quality adjustments as presets, like noise reduction, gamma, low key saturation, and white balance just like you can on Canon’s other pro camcorders.

While you’re shooting, the XF100 has autofocus (AF) with an external AF sensor. This system has five modes: instant, medium, normal, face, and face only. With these options, you can stay on target even in very bright or dimly-lit situations.

You may also appreciate the 8-blade iris that creates a bokeh effect and cuts down on light diffraction so you can use a smaller aperture. And if you do up-close filming, you’ll love the macro minimum focus distance. It’s only 20mm, or less than one inch.

There is a lot more to love about the Canon XF100, like its multiple recording modes. It can do both interval recording and frame recording, like you would need for Claymation films. It can also be paired with another XF100 (or XF105) to do stereoscopic 3D recordings. And it can shoot in infrared capture mode, too. 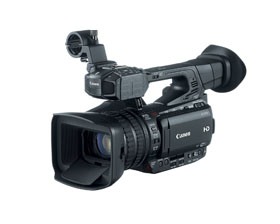 Also new on the XF200 are three lens control rings instead of the single switchable ring that the previous model had; again, a huge asset for immediate control as you shoot; the focus ring in particular is easy to use and get precise adjustments with.

When the XF100 has so many top features, why would you choose the Canon XF200 instead? They have a lot in common. But let’s go over some of the differences between them.

To begin, the XF200 has 20x optical zoom compared to 10x on the XF100.But it has an even closer macro distance of only 10mm. And it has a new 5-axis image stabilization system.Meanwhile, its CMOS sensor is 1/2.84-inch instead of only 1920×1080, which means it has a higher total pixel count.

And besides using the MXF MPEG-2 format, it can record in MP4. This is a perfect addition for creating films to be shared online.

While its view screen is the same size, it’s a touchscreen for easy control over the camera’s settings. Plus, there are three lens control rings on the XF200 instead of only one. Unfortunately, all these improvements come at a price. The XF200 is both larger and heavier than the XF100.

But there are more new features on the XF200 that you’ll enjoy. For one, it’s Ethernet ready and comes with Wi-Fi for easy file transfer and preview. But you can also livestream over an IP network, too, and control the camera over Wi-Fi.

Plus, you can manage the XF200 with a remote control for various functions like recording stop and start, zoom, focus, white balance, and black gamma.

Of course, you’ll still have other handy features that are standard on Canon’s professional camcorders, like twin CF card slots for relay recording, and infrared recording capability in either green or white modes.

And there’s one more important difference between the XF100 and the XF200—the XF200 has 4-channel PCM audio recording at 16-bits/48kHz compared to the XF100’s 2-channel recording. 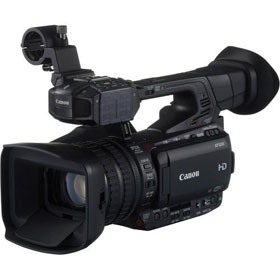 These new options exist to help the XF205 integrate with other cameras and broadcast equipment. They include Timecode and Genlock terminals as well as 3G-SDI and HD-SDI ports. The ports make it easier for camera operators shooting sports events, TV shows, live broadcasts, and even weddings and social events. With them, they can perform accurate syncing during editing and post-production.

To learn about more top features of the XF205, see the XF200 described above. 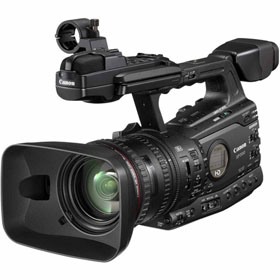 Our final pick is the Canon XF300, the largest and heaviest camcorder of these four models. But it comes with a larger LCD display that you can customize, plus a large viewfinder. There are many versatile and powerful controls including 13 buttons you can assign to varying functions like AE Response and Shockless White Balance. And like the XF200/XF205, the XF300 has three individual control rings for focus, iris control, and zoom.

But oddly enough, the XF300 has several limitations. For one, it has a smaller pixel count than the XF200. It’s also limited to 2-channel audio recording, although you can record with both the built-in condenser mic and an external microphone at the same time.

To continue the list of differences, the XF300 only records in MXF format, not MP4. And its top resolution is 1920×1080, or full HD. Of course, Canon’s codec is compatible with several top of the line non-linear editing software programs. And you’ll still be able to save presets, pre-record, and enjoy all the other great features common to Canon’s pro camcorders.

The Canon XF100 is the smallest and lightest camcorder out of these four. It’s very capable, versatile, and powerful, perfect for a wide range of functions. You can use it for everything from filming a news broadcast or documentary to making stereoscopic films (if you have a second XF100). If you want a professional camcorder, and you’re on a budget, this may be the perfect choice for you.

Meanwhile, the Canon XF200 and XF205 are the most advanced out of our four picks. The XF205 even incorporates terminals and features for interoperability with broadcast equipment. If you want the capability to record 4-channel audio or use the MP4 codec instead of Canon’s MXF, get one of these two camcorders.

Finally, the XF300 will allow you to customize more controls, but it’s heavier and larger and a little limited in some ways compared to the XF200/XF205.

Click here to Check out Canon XF100 Price on Amazon.com!

Click here to Check out Canon XF200 Price on Amazon.com!

Click here to Check out Canon XF205 Price on Amazon.com!

Click here to Check out Canon XF300 Price on Amazon.com!