Camcorders are essential for capturing live shows and events like weddings and news-worthy happenings. When you record video, you want great video and sound, plus the ability to transfer your file and edit it easily. Let’s take a look at two top camcorders from Canon to see which one will be the best for you.

While the Vixia G30 (described below) has been discontinued, the G20 is still going strong. This may be because it’s one of the few camcorders in this price range with full manual mode. On other words, if you want a professional camcorder but can’t quite afford one yet, the G20 is an excellent choice for you.

The manual controls on the G20 include aperture, shutter speed, focus, and gain. There are six white balance presets, two manual white balance settings, and the ability to change color temperature. Plus, with the onscreen histogram, you can get immediate feedback about the levels of light and color in your image.

If you’re filming without a lighting kit, chances are the G20 can handle that just fine. Because it can record at 24fps, it does well in dim light. Plus, its lux rating is 0.1, very low for a camcorder at this price. Vloggers that record in home studios like the G20 because its maximum (wide) aperture is f1.8 and that’s great for artificial and low light.

There are three settings for recording video with the G20—full HD 1080p at 60fps, 30fps, and 24fps. These make the camcorder similar to a DSLR camera. With plenty of light, the 60fps setting records beautifully clear, vivid video. At 24fps, the video takes on a cinematic touch.

How do you access all these great settings and options? With the built-in touchscreen. If you happen to forget your SD card, you don’t need to worry. The G20 has 32GB of internal memory (for up to 12 hours of video) besides the two onboard card slots.

For filmmakers who care about quality sound, there is a built-in mic as well as an external mic port. And since this G20 comes with the Pro Bundle, it has the Razer microphone and Behringer mixer for adjusting audio levels on the fly.

There are only three downsides to the G20. The battery is only good for a maximum of 2 hours of recording, so you’ll probably want to invest in a backup. Second, the only recording format the G20 offers is AVCHD which means you may spend some time converting to another format. And third, while the G30 described below has Wi-Fi for easy file transfer, the G20 does not. 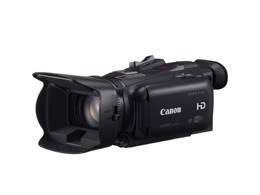 If you’ve been a Canon customer in the past, you probably know they aren’t shy about discontinuing products. Although the G30 is officially replaced by a later model, you can still find it for sale at a great discount.

Why would you want a G30? For starters, it offers dual-band Wi-Fi for transferring files where the G20 does not. Second, where the G20 has a proprietary shoe design, the G30’s shoe is probably compatible with all the DSLR accessories you have.

Third, the CMOS sensor is improved, and the image processor has been updated. And fourth, you can now record in both AVCHD and mp4, a big relief for those who hate wasting time converting video files to another format. The G30 still offers full 1080p recording, plus lower speeds for dimmer light and a cinema-like feel.

Do you want a point and shoot camcorder, or would you prefer more control?

If you prefer more control over settings, having built-in memory, and don’t mind the AVCHD format, get the G20.

If you want a camcorder that allows you to share files over Wi-Fi and offers the mp4 format for recording, get the G30. The fact that it’s discontinued only means a better price for you.