It’s time to capture the moment as it unfolds. You need a portable and reliable camcorder. Which do you choose: the Canon XA20 or the Canon XA30? Which one is better? What are the differences between them? Let’s look at them both to help you decide. 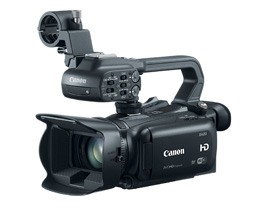 The Canon XA20 came out on the market first before the XA30. It’s been a very popular camcorder for wedding photographers and other professional videographers. Although its footage is closer to DLSR quality (4:2:0) than the type used by network news stations (4:2:2), it’s packed with features far superior to a consumer model.

For one, the XA20 does a great job capturing video in low light, especially if you record in 24p or AVHCD Progressive at 28Mbps. It’s also capable of recording in infrared for very low light conditions. For fast-moving subjects, like players in a game, the XA20 has 1080/60p at 35Mbps. If you want to take a still picture, it shoots in 16:9 aspect.

Second, the optical image stabilization is great for a handheld model. You can get great results even without a tripod. The 20x optical zoom lens goes from wide-angle 29mm with stabilization on out to 576mm telephoto. For sunny days or bright lights, you can flip down the lens hood to control flare.

If you’re new to using a camcorder, there’s a full auto setting that takes care of the details and produces good quality video. If you want to set the white balance, exposure, and focus manually, the XA20 will let you do that, too.

While the onboard mic isn’t bad, it’s hard to record good sound on windy days. Instead, you can use one or both of the two XLR inputs to record from external microphones. The inputs provide phantom power and give you manual gain control. Plus, you can also link a Bluetooth mic to the XA20 and using it like an intercom.

The battery lasts up to a maximum of 190 minutes, a little less than the one that comes with the XA30 described below. After you’re done shooting, you can use the built-in Wi-Fi connection to share your films and photos with other devices like a PC, smartphone, or tablet.

When the Canon XA30 was released, it was intended to be an improvement over the XA20. It has a new Advanced HD CMOS Pro Image Sensor that works even better in low light. This new sensor has low luminance noise of just +3dB to cut down on graininess.

It can also shoot in diffused infrared light. The new Wide DR mode and Highlight Priority feature doubles the dynamic range of the XA20 to better handle recording where there would normally be under and overexposed areas.

The XA30 has both optical and digital image stabilization (which is new), but uses the same DIGIC DV 4 image processor. It can also record in the same formats (mp4 and AVCHD) at 60p full HD and 24p for a cinematic appearance.

The dual SD card slots and over 4 hours of battery time mean you’ll be able to capture a lot of video before you need to swap cards and batteries. While full auto mode is nice for casual shooting, pro videographers will appreciate the fact that they can take full manual control of the XA30. You can also program some of the buttons for custom shooting so you don’t have to wade through all the menus to find what you want.

Like the XA20, there are two phantom-powered XLR inputs for external microphones. Plus, there is also the possibility of linking a Bluetooth mic to the XA30.

At the end of the shoot, you can use the built-in Wi-Fi to transfer files. The XA30 also offers FTP file transfer at 3Mbps for fast sharing.

There are two main differences between the Canon XA20 and the XA30. First, the new CMOS sensor and the Wide DR mode on the XA30 makes it even better than the already-excellent XA20 for shooting in low light. Second, the battery life is longer on the XA30, but this is not a deal-breaker since you can always upgrade the stock battery on the XA20.

If you plan to film a lot in dim conditions, consider getting the XA30.

If you want an all-around good pro camcorder, get the XA20.