When you’re serious about videography, you need a camcorder. A handycam beats DSLR cameras and cell phones when you’re recording important life events like a wedding. But with so many video recorders on the market, it can be hard to choose between them. Let’s take a look at two of the best camcorders to see which one will be best for you. 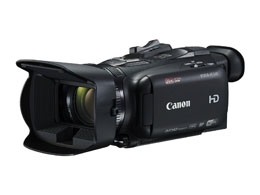 The Canon VIXIA HF G40 is perfect for when you want to record anything from a wedding to news footage or a documentary. If you have an older Canon, you might want to consider upgrading since the G40 has a new CMOS sensor. It’s the same sensor found in two of their professional grade cameras.

This new hardware gives the user the ability to record high quality video in low light conditions. Specifically, the 2.91 megapixel HD CMOS sensor captures 2136 x 1362 pixels, plus it has a noise rating of +3dB. This all means that your video will look clear and detailed even with dim lighting. You won’t end up with grainy footage this time.

But it’s not just how well the G40 works in low light that makes it a great camcorder. It also offers a mix of features for both novice and advanced film makers. For example, it has manual controls and customizable buttons, plus zebra and test tone features. And the Highlight Priority and Wide DR Gamma let you capture color as it’s recognized by human eyes.

The 20x optical zoom video lens is designed to help you shoot at a distance or get up close, within two feet of your target, without blur. It’s similar to a 35mm camera lens, plus it has coatings that reduce ghosting and flare. And the 5-axis system combines software and hardware for intelligent optical image stabilization. You can choose powered or dynamic modes, depending on how much camera shake you’re dealing with.

After you record a clip, you can review it on the built-in OLED touchscreen, or connect to a smartphone, computer, or tablet and transfer the file over Wi-Fi. You’ll be able to choose which setting you prefer for recording, from 1080/60p mp4 to 28Mbps AVCHD or cinematic 24p.And with the high capacity battery and dual SD card slots, you’ll have plenty of time and space to capture it all.

But what if you want slow-motion video? That’s not problem, because the VIXIA HF G40 can record up to 1200x the original speed so you can slow it down later. Plus, the focus assist feature magnifies your target so you can check tones before you shoot.

In conclusion, Canon didn’t forget that audio is also very important in film-making. While there is no XLR port, you can connect an external microphone through the 3.5mm port. Or you can use Canon’s wireless mic, sold separately. The G40 records audio with Linear PCM for best quality. 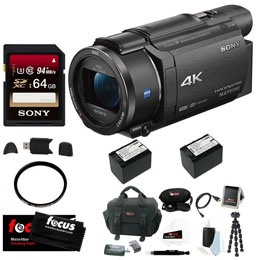 If you thought the Canon VIXIA HF G40 sounded good, but you need to shoot higher resolution video, take a look at Sony’s FDR-AX53. It’s a 4K handycam, capable of recording ultra-HD video at 100Mbps. That includes either 24 or 30p with Dolby 5.1 audio through the built-in mic, plus it shoots 16.6MP photos, too.

If you want to record for slow-motion effects, the FDR-AX53 can also handle full HD 1080p at 120 frames per second. And you don’t need to worry about a lot of noise when you film in low light. This handycam’s new Exmor CMOS sensor and SteadyShot image stabilizing system keeps everything looking clear and crisp. It also helps that this camcorder is built with a Zeiss 26.8mm Vario Sonnar lens with 20x optical zoom for 4K, or 40x for HD video.This Zeiss lens captures true-to-life colors, while its coatings cut down flare and ghosting.

In conclusion, this Sony FDR-AX53 Handycam comes in a deluxe bundle that includes useful accessories like a tripod, two extra batteries, a carrying case, and an SDXC memory card.

If you prefer to record in UltraHD or 4K, the Sony FDR-AX53 is your best choice. You’ll be able to take still shots, record in slow-mo, and transfer your recordings wirelessly.