Whether you want to make a music video of the band or record a podcast for broadcast, these two recorders are just what you need. They have condenser microphones that are much better than anything on a handheld camera, plus they record clear video even in low light. Let’s look at both to see which is the best for you. 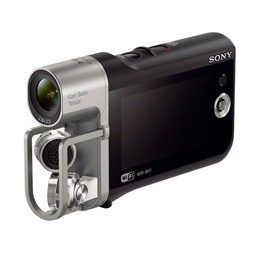 The next time you want to record a live performance, put down your phone and your camera and pick up the Sony HDR-MV1. Think of it like a Go Pro with better audio recording.

The HDR-MV1 has two X/Y condenser mics angled on the front to capture 120 degrees of stereo sound. Even up close to the action you won’t get the buzz and loss of clarity like you would when recording with other devices.

The HDR-MV1 records audio in LPCM CD-quality or compressed AAC format. If you wish to connect an external microphone, you can because it has a MIC IN port. The Linear PCM captures at 44.1kHz 16-bit, while the AAC records at 48kHz 128kbps. Sony chose the latter format to be Internet-upload friendly.

The 120-degree wide angle Zeiss camera lens records HD video at 1920 x 1080 30p in mp4 format. You can film right from the front row, even in low light, and still get the band in the frame. Even better, the built-in audio lip sync keeps the sound and video on track when you edit later.

The files you record are very easy to transfer between devices. The HDR-MV1 is equipped with Wi-Fi and NFC so it can send files to a computer, a mobile device, or upload online. The Wi-Fi and NFC also let you use your phone or tablet to control the HDR-MV1 remotely. Just mount it on a tripod and monitor it from your seat. The Zoom Q8 described below doesn’t have these wireless features.

You’d think with all these features that the battery wouldn’t last long, but it can record up to 3-1/2 hours before it needs to recharge. For longer concerts or events, simply use the included USB cable to plug it into a computer or buy the Sony AC adaptor AC-UD10 to keep it running. 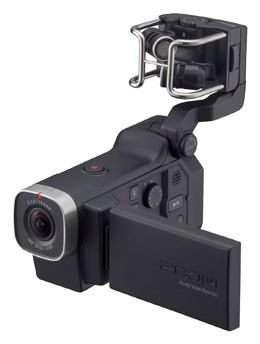 Zoom goes head-to-head with Sony with their Zoom Q8 Handy Video Recorder. While they seem similar at first glance, the Zoom has some high end features that might win you over.

Instead of only one HD video mode, the Zoom Q8 has five. Its maximum is an impressive 3M HD with a resolution of 2304 x 1296 pixels and 60fps. If you plan to do slo-mo edits later, this is a very useful setting for recording. There are also lower-res WVGA modes that won’t use up your SD card storage space so fast.

The Zoom Q8 has a wider-angle lens that records 160 degrees without a fisheye effect. If that’s too wide for you, simply limit the viewing angle. If you want a close-up on the drummer in the back, use the 4x digital zoom. Check everything you’re framing on the built-in rotatable LCD screen.

Like the Sony HDR-MV1, the Q8 has two X/Y stereo condenser mics. These microphones can be removed and replaced with other Zoom mic capsule like shotgun or mid-side. They record audio up to 24-bit/96k in 4 channels, something the Sony can’t do.

When it’s time to export your files, pull out your SD card, or use the included USB cable or plug into the HDMI port.

If you want the highest resolution of audio and video recording you can get in a portable recorder, consider getting the Zoom Q8.

If you prefer the ability to transfer files wirelessly and use a mobile device as a remote control, consider getting the Sony HDR-MV1.