Do your videos shake? If you’re making a horror film maybe you actually want to induce nausea. Otherwise, you need a stabilizer. Let’s look at these two made by Glidecam and see which one will best help you shoot smooth video. 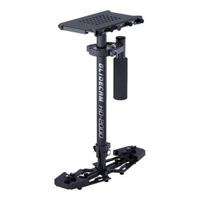 The 2000 Pro is an earlier version of the Glidecam HD-2000 we’ll look at later. The 2000 Pro has been discontinued by Glidecam. But early adopters of the Pro were impressed by its ability to help them shoot floating and flying video without dollies and tracks. The Glidecam works by means of a three-axis gimbal that dampens the user’s body movements. The user can walk, run, and climb stairs and their video stays smooth. It allows 360-degree panning without the user having to rotate their own body. It also works for booming.

The Pro is made for cameras and camcorders weighing between 2 and 6 pounds. Oddly, if the camera is too light, the Pro seems to be harder to balance. On top, it has a plate with ¼” screw holes. It’s not quick-release, but it’s compatible with quick-release plates.

The body of the Pro is aluminum. Alone, it weighs 2.1 pounds. It comes with 14 discs that serve as counterweights to balance it. Each disc weighs 2.95 ounces. Once a camera is mounted and the weights added, the Pro ends up being pretty heavy to hold in one hand for long shoots. This is something to consider if you don’t have an arm brace or vest.

Another problem that some users discovered is that the handle hits the base during low shots. The Pro’s minimum height is 14.5 inches tall and its maximum is 19 inches. It can serve as a monopod and it has rubber feet on its base, which means the user can set it down without removing the camera.

In conclusion, the 2000 Pro really works well once the user has mastered the art of balancing it and using it. It takes practice and patience, but it is possible to shoot smooth scenes with just a handheld stabilizer.

More features of the Glidecam 2000 Pro

The Glidecam HD-2000 is an improved version of the Pro we looked at earlier. Once you’ve learned how to work with it you’ll have super-smooth video.

The Glidecam is made for cameras and camcorders weighing between two and six pounds, just like the Pro 2000. It weighs 2.53 pounds without a camera mounted or any counterweights added, so it’s heavier than the Pro. Once it’s loaded up, it gets pretty heavy for one hand to hold. The user can mount the HD-2000 on a vest or forearm brace, sold separately.

The HD-2000 uses a three-axis gimbal to dampen the user’s movements. It makes the video look like the camera is floating instead of bouncing even when if the user is running up or down stairs. Once it is balanced, the Glidecam makes it possible to shoot smooth 360-degree pan and swooping tilt movements.

The most difficult part of using either the HD-2000 or the Pro may be getting them ready to use. Glidecam includes 12 counterweight plates in the box. Each plate weighs .272 pounds. The user has to add or remove plates on the base platform until the Glidecam is balanced. They can also extend the center post. It may still be a challenge to set up, but fewer users have complained about the HD-2000.

When the center post is fully extended, the HD-2000 is 22 inches tall. When fully compressed, it’s 15 inches tall, so it’s longer than the 2000 Pro. The user can set it down on its base’s rubber feet without removing the camera just like they can with the Pro. In the HD-2000, Glidecam resolved the problem that the Pro had where the handle strikes the camera plate during low shots.

More features of the Glidecam HD-2000

To take advantage of the limited warranty and later design improvements, go with the HD-2000. But keep in mind it is heavier than the 2000 Pro and those few ounces difference could make your muscles burn more during long shoots.

If you want a lighter weight and slightly smaller stabilizer, the Pro 2000 is the way to go.

Click here to Check out Glidecam 2000 Pro Price on Amazon!

Click here to Check out Glidecam HD-2000 Price on Amazon!