Glidecam filming equipment and camera accessories have a reputation for being able to reproduce blockbuster Hollywood shots without filmmakers having to pay for expensive equipment. But each Glidecam stabilization unit has different features that make them better suited for being used by people of different filming experience. When choosing between the Glidecam XR 2000 and the Glidecam HD 2000 it is harder to see difference between the two models based solely on price and letters in the name, so here is an in-depth look at the two different stabilization units to give you a better idea of what they can both be used for. 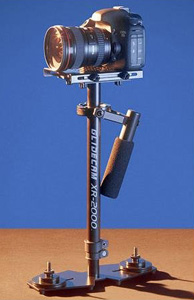 The Glidecam XR 2000 has been designed to be used with compact and low profile cameras that are typically used in low budget filming and independent film productions with little to no funding. The load carrying capacity of the Glidecam XR 2000 ranges between 2lbs and 6lbs making it suitable for use setting up a static shot or using it as a stabilization unit for handheld filming.

Utilizing standard ¼ inch mounting holes, the dynamic camera mounting platform on the Glidecam XR 2000 allows for the position of the camera to be adjusted whilst mounted without having to remove it from the stabilization unit, allowing for more consistent filming. Not only that, but you don’t need tools in order to adjust it. The Glidecam XR 2000 telescoping center column can also be adjusted without tools making it not only easier to operate but also a great time saver when it comes to trying to get more filming done in a short space of time.

The foam grip handle is comfortable too hold and makes the unit easy to operate, allowing for precise and smooth filming, though you will need to have equipped a suitable lens and focused it properly before filming. The three axis gimbal system means that shots can be precise especially since bearings are used at what Glidecam consider the vital points in order to maintain accuracy. 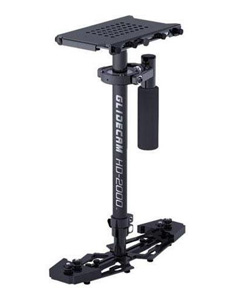 The Glidecam HD 2000 has a similar load capacity to the Glidecam XR 2000, being able to support up to 6lbs in weight. The Glidecam HD 2000 is a very basic model, butit functions well as a stabilizing unit and is something that anyone hoping to be the next Martin Scorsese, Anthony Minghella or Alfred Hitchcock won’t go far wrong with when they are just starting out.

With ten additional weights to fine tune stabilization and a hinged handle, the Glidecam HD 2000 can be used for static shots as well as panning and moving shots in the same way that the Glidecam XR 2000 can. The Glidecam HD 2000 has a broad cheese plate mount that means you can properly center your camera on the stabilization unit, making it easier to balance. It also comes with a detailed user manual to help with assembly and operation.

The Glidecam HD 2000 is great unit to use if you are experimenting with long shots, running or tracking shots with your handheld camera as it will remove the jerky and shaky imaging that you get when you try those kinds of shots without a stabilization unit.

There are some aspects to the Glidecam HD 2000 that make the Glidecam XR 2000 a much better choice.To begin with, if you haven’t any prior experience using a stabilization unit it can be extremely difficult to set up and balance when you first start using it, despite the details in the user manual. There are also no bubble levels on this mount, so it can be really hard to get a precise alignment with this rig. However, you can purchase a quick release plate that has bubble levels built into it to overcome this problem. There is also a problem with your camera shifting when using the rig due to the cheese board mounting plate, this can be solved by using an additional head or mount.

The Glidecam HD 2000 is the cheaper model and it does do what you want a basic stabilization unit to do – it removes shaking from moving camera shots and allows for accurate static shots without needing to invest in two pieces of equipment; whereas the Glidecam XR 2000 is much more suited to filmmakers with a certain level of experience who are lacking the funds to invest in a more complex rig. If money is the deciding factor, then the Glidecam HD 2000 will be more capable of handling your filming requirements. However, if your budget can stretch to it, then the Glidecam XR 2000 is well worth the extra cash.