Do you want to reduce camera shake in your next film project? If you don’t have a dolly or a track system you can still use the next best thing: a hand-held camera stabilizer. Let’s look at these two stabilizers and see which one will help you shoot better video. 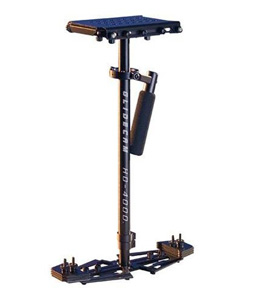 There’s a reason why the Glidecam HD-4000 won Videomaker’s Best Products 2010 award. Once you’ve learned how to work with it you’ll have super-smooth video.

The Glidecam is made for cameras and camcorders weighing between four and ten pounds. It weighs 3.3 pounds without a camera or any weights added, but that helps make it steady even in windy conditions. It’s made for use with two hands, unlike the Merlin2 that we’ll discuss later. One hand holds the handle and the other guides the camera. The user can also mount a Glidecam on a vest or forearm brace.

The Glidecam uses a three-axis gimbal to dampen the user’s movements. It makes the video look like the camera is floating instead of bouncing even when the user is running up or down stairs. Once balanced, the Glidecam makes it easy to shoot smooth 360-degree pan and tilt movements. It has separate control knobs for each function. But there is no bubble level like there is on the Merlin2.

The most difficult part of using the Glidecam may be getting it ready to use. Glidecam includes 12 counterweight plates in the box. Each plate weighs .272 pounds. The user has to add or subtract plates on the base platform until the Glidecam is balanced. Raising or lowering the telescoping center post changes the balance, and so does moving the camera around on the mounting platform. The Glidecam has a quick-release plate so the user can switch cameras easily. But then the Glidecam has to be re-balanced for the new camera. With practice, it can take less than a minute.

When fully extended, the Glidecam reaches 28 inches tall. When fully compressed, it’s 20 inches tall. The user can set it right down on its base’s rubber feet, something that can’t be done with the Merlin.

More features of the Glidecam HD-4000 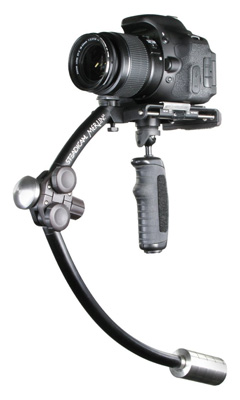 The Merlin2 is made by the famous Steadicam company whose name is a synonym for camera stabilizers. It won the Professional Photographer Hot One award in 2013.

The Merlin2 is designed to be used one-handed. It folds up to ride on a shoulder too, something that the Glidecam can’t do. The Merlin2is very lightweight and it’s made for lighter cameras weighing between half a pound and 5 pounds. This means it may not be as stable in windy conditions, but it can be controlled with the light touch of a finger.

Some nice features of the Merlin2 are its ability to support long lenses and a bubble level right below the camera mounting plate. These are two things the Glidecam HD-4000 doesn’t offer.

Like the Glidecam, the Merlin2 has a gimbal system to minimize the effect the user’s body movements have on the video recording. It also has to be set up and balanced. Steadicam includes counterweights in the box. They’re mounted on the bottom tip. It comes with a quick-release plate that’s compatible with both cameras and camcorders. Fully loaded, the Merlin2 weighs less than the Glidecam. It also folds up for storage.

More features of the Steadicam Merlin2

Now let’s see which stabilizer will work for you.

First, how heavy is your camera? The Merlin2 supports up to 5 pounds and the Glidecam up to 10 pounds.

Next, can you manage the heavier weight of the Glidecam? Many users say that the Glidecam shoots smoother video than the Merlin2, but this is useless if the Glidecam is too heavy for you. Fortunately, both stabilizers have bracing accessories available for purchase.

Finally, do you want the convenience of being able to shoot from your shoulder? The Merlin2 can do that. It can also handle long lenses and it has a convenient bubble level.

Click here to Check out Glidecam HD-4000 Price on Amazon!