Vanguard has been manufacturing photographic equipment for over a quarter of a century. Their experience shows in the design of these two popular heads. Let’s look at them and see which one is the best fit for you. 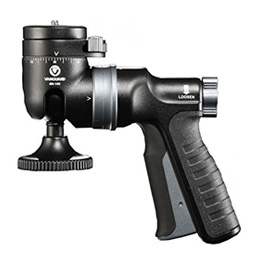 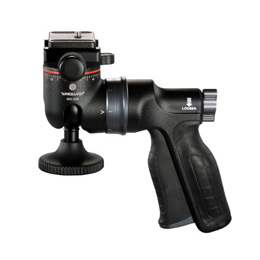 The GH-100 won the Pop Award as one of the Top Products of 2010 as featured by Popular Photography. The pistol grip style is an excellent way to control the head with only one hand. This leaves the other hand free to take care of the camera. Instead of adjusting separate locks for pan and tilt, all the user has to do is release the trigger. Squeeze to move, release to freeze. The grip has eight positions so it can be held just how the user likes it, even gangsta-style in a side grip.

The head has a bubble level, which is unfortunately hidden when a camera is mounted. (This is fixed in the GH-200 that we’ll discuss below.) There is a quick-release plate with dual locks that is made to keep the camera from being accidentally released. It is not Arca-Swiss compatible. (This is another issue that the GH-200 resolves.)

The ball head itself is anodized and it has an adjustable friction control system. It turns smoothly through 360 degrees of panning. There are 72 click-stops, one every 5 degrees, to help the user get the perfect panorama. The lateral tilt is -32 to +90 degrees. The forward and backward tilt is -8 to +90 degrees. People using this ball head for astronomy or other skyward photos have compensated for the lack of backward tilt by turning the grip around. This means using the pistol grip in reverse, but for a few still shots it isn’t too bad.(There are tripods that can compensate for this short-coming. Vanguard makes one.)

One other issue that some users have stated is the size and firmness of the grip. People with smaller hands or arthritis may find that the force required to compress the grip is too much work for regular use.

The GH-200 is the newer version of this head. It resolves the issues that the GH-100 had. The quick-release plate is now Arca-Swiss compatible so it is interchangeable with a lot of other brands of equipment. There are two bubble levels, and at least one stays visible on the side even with the camera mounted.

The GH-200 is made to handle large lenses. Its quick-release plate, or universal shoe, has a clamp knob to move zoom lenses back and forth. Like the GH-100, the user can adjust the friction, and then pan or tilt using just one hand. The 360-degree pan has clicks every 5 degrees for the perfect panorama. The tilt side-to-side is -32 to +90 degrees. The forward and backward tilt is -8 to +90 degrees, so it has the same challenge as the GH-100. Photographers who want to capture shots up highmust turn the head around and use the pistol grip backward. Some tripods can compensate for this.

The size and firmness of the grip on the GH-200 may create a difficulty for people with smaller hands or arthritis. One other user complaint is that the quick-release uses a slotted screw so the user needs a coin or screwdriver to turn it.

If you love the pistol grip style, these are both great heads. They support a lot of weight and are easy to move and control.

If you must have an Arca-type quick release plate, go with the GH-200. It is a little bit heavier, but it has the advantage of being made for large lenses. Vanguard also made it so the spirit, or bubble, level remains visible.

The GH-100 remains a favorite even with its proprietary release plate. It could be ideal for someone who doesn’t need to interchange a lot of photographic equipment.