A moving camera doesn’t have to produce a jerky film. Once you’ve shot smooth video with a handheld stabilizer gimbal, you won’t want to shoot without it. It creates much better results than relying on just post-processing software to clean up shake. Let’s take a look at these two gimbals from Beholder to see which one will be the best for you. 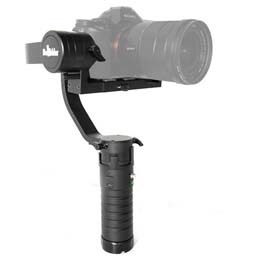 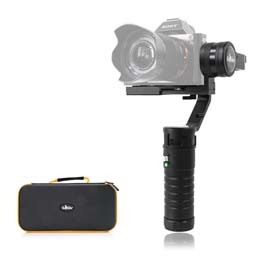 The Beholder DS1 is a 3-axis brushless gimbal made to support mirrorless or DSLR cameras up to 3.7lbs. (This weight limit includes lenses.) Some of the models that fit in this category are the Sony A7, GH4, and G7 Series as well as the Canon 5D, 6D, 7D, GX7, NEX, and DMC Series.

If you want to use the DS1 with more than one camera, it has a quick release baseplate. Mount a new baseplate to every camera to swap them with ease. The baseplate also helps you to disconnect the camera from the gimbal in a flash. It slides forward and back to betterbalance the camera.

The gimbal has four modes: follow, lock, inverted, and briefcase. “Follow” lets the gimbal move your camera to pan and tilt as you move. “Lock” keeps the camera still. “Inverted” mode lets you take low shots. “Briefcase” mode is especially nice to use when you have a two-handled grip (sold separately).

Select a mode and the DS1 adjusts to it automatically. Or use the built-in joystick in the handgrip to pan and tilt. Use the 3/8” thread hole to mount a monopod and create a jib. The DS1 is made from strong, lightweight aluminum and weighs 2.4 pounds.

It uses three rechargeable batteries so the gimbal can operate up to 3 hours.The USB port allows you to attach a cable to run a light or even charge your phone or camera.

While the Beholder DS1 supports up to 3.7 pounds, the MS1 holds up to 1.9 pounds. Cameras in this weight class are generally mirrorless or SLR, like the Sony A7, LUMIX G7, or the GH3 and GH4. If you have a DSLR, take a look at the DS1 described above.

Other than the lower weight limit, the MS1 is very similar to the DS1. Its body is made from anodized aluminum and it weighs just 1.7 pounds with the batteries inserted. Connect a USB cable to charge your camera or phone. The lithium-ion batteries last up to 3 hours of runtime between charges and take up to 5 hours to recharge. An LED on the handle indicates if the batteries are low on power.

The built-in joystick in the handle lets you pan and tilt with just your thumb, without moving the MS1 itself. Or use one of the two modes to film. The “Lock” mode keeps the camera in position. The “Follow” mode keeps up with your pan and tilt movements. The total range of motion is up to 355 degrees for pan, 355 +/-180 for pitch, and 355 +/-60 for roll.

Since the MS1 is lightweight and made for cameras that weigh very little, Beholder suggests keeping the gimbal completely still until it’s fully initialized. This avoids problems with calibration and balance.

The quick-release plate slides back and forth to help balance the camera on the gimbal. If your camera is especially lightweight, use the included balance weight head ball baseplate to steady it. The MS1 is compatible with various accessories like monopods and tripods.

If you have a heavier camera up to 3.7 pounds (with lens), consider getting the DS1.