Remember the days of Polaroid instant photos? You took a picture and then waited for a minute while it emerged from the camera and dried. Polaroid stopped making that kind of film a few years ago, but now there are new alternatives. Both Polaroid and Fujifilm sell instant cameras that print your photo on the spot.

The technology is different now but the idea is the same. You can have a hard-copy memory to take with you or give away. Let’s take a look at cameras from both companies to see which one will be the best for you. 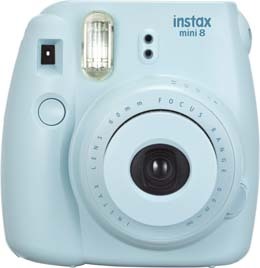 Fujifilm’s INSTAX Mini 8 is an improved version of their earlier model, the Mini 7. It’s smaller and lighter, with improved optics and automatic exposure measurement. It will show you with a flashing LED which aperture setting is recommended.

The new High-Key mode makes portrait photos look brighter and softer. Keep in mind the INSTAX Mini 8 doesn’t offer the clarity of high-resolution digital cameras. The photos it prints have more of a vintage look. Plus, they are hard-copies only with this camera. There is no option to save a digital file.

But similar to the old Polaroid instant photos, you can still watch the image develop right before your eyes after it leaves the camera. Each photo is about the size of a credit card with a white border around it. The quality of these images is about equivalent to those produced by the Polaroid PIC-300 described below.

The INSTAX Mini 8 has a built-in flash that fires every time you take a photo. The shutter speed is fixed at 1/60-second and the lens is a 60mm f/12.7 lens. This means action shots will be blurred although the film speed is ISO 800. But you can control the aperture and therefore the exposure, with four settings: Cloudy/Shade, Partly Sunny, Bright Sun, or Indoor.

Film isn’t included in the box with the INSTAX Mini 8; you’ll have to buy it separately. It’s sold in cartridges of 10 photos. The camera will count down to show how many photos you have left. Owners have commented that the film for the INSTAX line of cameras is less expensive than the cartridges used by the Polaroid camera that we’ll discuss below. 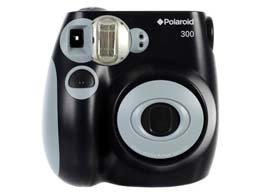 Although it looked for a while like there would be no more instant Polaroid photos, the company has come back with the PIC-300. Like the Fujifilm INSTAX Mini 8, it takes credit-card-sized photos with a glossy finish and a white border.

The PIC-300 doesn’t come with a film cartridge in the box, you’ll have to buy it separately. The packs of ten photos are simple to load into the back of the camera. The camera shows a countdown timer of how many photos are left just like 35mm cameras used to do.

The film paper is innovative. There are billions of dye crystals embedded in it and they aresensitive to heat. The print head of the camera sends pulses of heat through the paper to activate the dyes. As the photo cools, the image fixes in place right before your eyes.

The flash on the PIC-300 fires automatically when the camera senses low light. There are four exposure settings to choose from: indoor, cloudy, fine, and clear. The shutter speed is fixed at 1/60-second, so action shots are blurred. Like with the Fujifilm camera, these photos have a somewhat vintage appearance with a soft focus. There is no zoom.

If you don’t take a photo for 5 minutes, the PIC-300 powers down into an energy-saving mode until you activate it again. This is good since the camera uses 4 AA batteries at a time, double what the INSTAX Mini 8 needs.

Having the ability to print instant photos is fun and gratifying. These two are especially nice for portraits and close-up shots between 2 to 8 feet away.

You can hold memories of special moments in your hand, or give them as gifts to others. An instant camera may never replace your DLSR, but it will always have its own special place in your gear bag.

If you want a camera that continues the Polaroid tradition with the same name brand, the PIC 300 may be right for you.

If you prefer to save a little money on both the camera and the film, you may appreciate the Fujifilm INSTAX Mini 8.