As an Amazon Associate I earn from qualifying purchases.
Home
Stabilizer reviews
Feiyu G3 vs G4 vs G4 Plus Review

Viewers prefer smooth video over nausea-inducing, jerky films. Slick zooms and floating shots look professional. When you share your video with others, or review your memories later, you’ll appreciate the difference that a gimbal makes. Let’s take a look at these three from Feiyu to see which one will be the best for you. 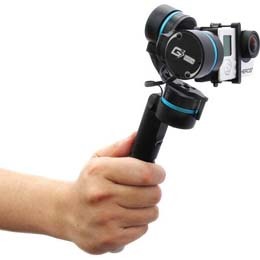 The Feiyu G3 is made especially for GoPro Hero cameras, specifically the 3, 3+, and the 4. When you film your next trail ride or ski adventure, the G3 will keep the action looking steady. The 3-axis gimbal is capable of 300 degrees of pan and tilt with a 90-degree roll rotation.

You might think that the image stabilizer feature built into your camera is good enough. If that’s the case, watch a video shot with the Feiyu G3 and compare it to video that depends only on software image stabilization. You’ll see the difference.

For still shots, you can lock the three axes and use the G3 as a handheld monopod. It even works as a selfie stick. Or press the button to select the mode to let the camera pan and tilt as you move the handle.

First, mount the camera onto the G3. Then power on the gimbal. Keep it motionless while it initializes. There are three modes you can select by pushing the button: Heading Follow Mode, Heading and Pitch Follow Mode, and Heading Lock Mode.

The G3 runs off rechargeable batteries. The blue LED light indicates the status of the charge: three flashes means that it’s fully charged, while two flashes means there is enough power to operate. One flash tells you the power is low, while repeated flashing means that it’s time to recharge. The same blue LED also tells you which mode you’re using.

Lock mode is when pitch and roll are locked into one position. Hold the button for a long press and the LED stays lit.

Heading and pitch mode keeps the roll angle constant. Press the button twice and the LED will flash twice.

Heading follow mode (or pan mode) allows only the heading to move while the pitch (up and down) and roll angles stay locked. Press the button briefly once and the LED flashes to confirm the selection.

There’s one downside to the Feiyu G3. Its software only works on Windows XP, Windows 7, and Windows 8. But you only need to use a computer if you want to update the firmware or calibrate the gimbal. 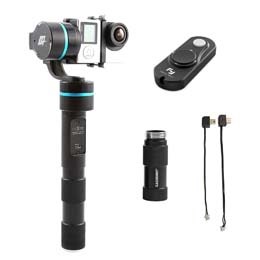 While the Feiyu G3 is an entry level gimbal, the G4 has advanced features. You can power a GoPro camera with the batteries inside the gimbal. The battery extender allows longer operation of both the gimbal and the camera.The G4 also comes with a wired remote so you can control your camera without holding it or the gimbal.

The remote lets you adjust pan, tilt, and roll without touching the gimbal at all. You can calibrate the G4 without using a computer.You can use the included video output cable to connect your camera to a monitor. If you want to upgrade the firmware on the G4, you will need a computer running Windows.

Just like your GoPro is made to withstand all the action, so is the G4. Its body is made from aircraft-grade aluminum to keep it lightweight and strong. Attach a GoPro with the thumb screws and you’re ready to go.

The controls are similar to the G3, just one button to push to choose between modes. Lock one or all of the pan, tilt, and roll actions to suit what you want to film. 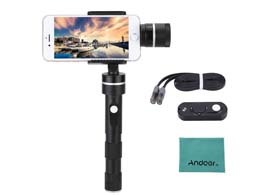 Perhaps you were thinking that you would need a GoPro camera in order to use a Feiyu gimbal. Not so! The Feiyu G4 Plus attaches to smartphones like the iPhone 5c, 5s, and 6. Since the phone clamp adjusts between 2.17 and 3.15 inches, it’s also compatible with Android phones of similar size. It comes with a screen cleaning cloth and a remote control.

The remote control connects with a wire and can adjust and calibrate the gimbal for you. Or you can use the single button on the G4 Plus to select the mode you want. It tilts up to 320 degrees, rolls 100 degrees, and pans 320 degrees, or it can lock all three modes to serve as a monopod.

Like the Feiyu G3 and G4 described above, the G4 Plus is made from aircraft-grade aluminum so it’s lightweight and strong. It comes with two different counterweights so you can choose the best one for your phone.

The rechargeable batteries run two to three hours. When they are getting low, the LED light will flash to warn you it’s time to charge them. The same LED light also confirms what mode you selected, like pan and tilt, or pan/tilt/roll. Take a look at the description of the G3 to see exactly what the light indicates.

More features of the Feiyu G4 Plus Handheld Gimbal:

If you prefer to use a smartphone to film, check out the Feiyu G4 Plus. It’s made especially for phones with larger screen sizes like the iPhone 6. It can also pan, tilt, and roll farther than either the G3 or the G4.

If you’re looking for a basic gimbal for a GoPro 3, 3+, or 4 that performs well and has a small price tag, take a look at the Feiyu G3.

If you would like a gimbal for the GoPro that comes with a remote control and a battery extender, consider getting the Feiyu G4.

Click here to purchase Feiyu G4 Plus on Amazon.com!