DLP (Digital Light Processing) projectors use the same technology as IMAX theaters. That’s probably why this type of home theater equipment is so popular. Plus, now many DLP projectors are capable of 3D projection. How do you decide between these two top brands of projectors when they seem similar at first glance? Let’s look a little closer and see if we can help you choose the best one for your home. 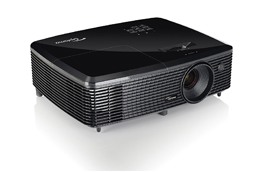 Optoma’s HD142X 3D projector puts out a sharp and clear image onscreen. It has a 23000:1 contrast ratio and a brightness rating of 3000 lumens. This is not an old school slide projector; this is ground-breaking tech that makes watching films enjoyable.

The projector creates a 66-inch diagonal image when placed eight feet from the screen. When it’s mounted twelve feet away, the image grows to 107-inches diagonal. When you want the big screen theater experience but you can’t afford a television in that size, a DLP projector is the answer.

The built-in keystone correction keeps the 1080p picture rectangular. You can watch a Blu-Ray movie at full resolution, no problem. Even better, you can also watch 3D films or play 3D games. Since the projector has a 144Hz refresh rate, the image you’ll see is free of flickers.

If you integrate the Optoma HD142X projector into your home theater system, you probably won’t need to use the built-in 10W speaker. But if you take the projector with you on the road, you’ll always have decent sound without bringing along other equipment.

Another feature of this projector that’s a real crowd-pleaser is its MHL connectivity. This allows you to stream videos and photos or display games on the big screen from your tablet or smartphone. You can also connect a Roku Streaming Stick and some other multimedia devices. Should you wish to connect a PC or Mac, the projector has two HDMI ports as well. 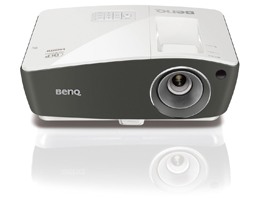 What sets the BenQ TH670 apart from the Optoma HD142X? For one, it has a USB port designed for powering an accessory. It also has closed captioning ability, meaning it can show subtitles that are embedded in a video even if you don’t have any other decoder attached.

But there is another difference that doesn’t surpass the Optoma HD142X. Although the 3000 lumens rating is the same, the BenQ’s contrast ratio is quite a bit lower. It’s only 10,000:1. This is still very good for a projector, but just below half of the Optoma’s contrast.

The BenQ TH670’s maximum image stretches up to 200-inches diagonal, instantly turning a wall into a home theater screen. This makes it fun to watch full 1080p films and 3D movies, or play games as the experience becomes very immersive with such a large image.

You won’t need to fuss with a lot of image adjustments, either. The projector has built-in keystone correction. First-time setup is streamlined so you don’t need to waste an hour to get things just right.

There is one HDMI port plus MHL connectivity on the TH670. You can connect a variety of sources like a smartphone, a computer, a tablet, or a multimedia device in order to watch videos and play games. You can even use it as a display for your desktop on your computer. And you won’t need an external audio setup because there is a built-in 10W speaker.

While the contrast ratio is much higher on the Optoma HD142X, both of these DLP projectors have a bright and clear image. But if you plan to use a projector for gaming, the Optoma has flicker-free technology that can make the experience more enjoyable.

Otherwise, the BenQ TH670 is a solid, all-around DLP projector. It’s from an award-winning company that offers a long warranty.