When you want a large screen theater experience in your home, a regular TV just won’t cut it. What if you could fill a whole wall with the movie you’re watching or the game you’re playing? This even applies to 3D video, too. Let’s look at these two home theater projectors to see which will be the best for you. 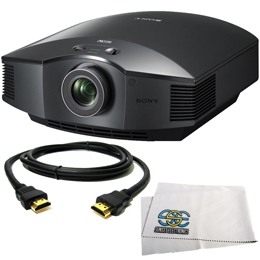 The Sony VPL-HW40ES projector is a little different from a typical DLP device. It uses Sony’s three chip SXRD imaging system for a better image on-screen. If you look at the specs that state it has 1700 lumens of brightness, it doesn’t sound all that powerful. But the SXRD LCD chips give the picture full 1080p HD resolution plus high contrast and rich colors. Plus, it can handle up to a 240Hz refresh rate for flicker-free 3D video.

The Sony projector won a “best in class” rating from the UK’s number one HD review website, HDTVtest. One thing the reviewer pointed out is that the image was amazingly clear in a first person shooter game, plus there was very little image lag, hovering around only 28 milliseconds.

You can connect a variety of devices to this projector because it has component, VGA, and two HDMI ports. Hook up a game console, a Blu-Ray player, and more so that the VPL-HW40ES becomes part of your regular media center.

Although it projects a large image on-screen or on the wall, the 1.6 optical zoom gives you flexibility on its placement in the room. And when it’s running, you’ll hardly know it’s on because it’s so silent. Its noise level is only 21dB.

BenQ’s short throw W1070 DLP projector is also capable of projecting both full HD and 3D images in 16:9 aspect ratio. It has 2000 lumens of brightness and a 10,000:1 contrast ratio for a sharp, clear picture. You don’t have to sit in a completely dark room to enjoy gaming or watching movies on-screen with this projector working behind the scenes.

Since it has a variety of inputs, you can hook up almost any device to the projector. S-video, RCA composite, VGA, and two HDMI ports let you connect game consoles, Blu-Ray players, PCs, and more. Just imagine how immersive it will be to watch your favorite movies on a 200-inch screen. And while the projector is operating, its maximum noise level is only 33dB. Mount it on your ceiling and use the remote to control it. You’ll hardly know it’s there, although it’s slightly louder than the Sony projector.

Users and reviewers have commented that the 3D capability of the BenQ is very good indeed. It has a lot of depth and very little or no crosstalk. The image doesn’t flicker and even looks better than some 3D televisions can reproduce.

It’s a tough choice between these two digital home theater projectors. Both offer full HD video plus full 3D images. Both are marketed as all-around solutions for gaming and viewing films. Both have a clear image even if the room isn’t completely dark. And both have been praised by owners and professional reviewers.

The Sony VPL-HW40ES might be your choice simply because it has a larger maximum screen size up to 300-inches diagonal. It also makes less noise when it operates—only 21dB.

The BenQ W1070 might be your choice because it connects to a wider range of legacy hardware including S-video.