If you like the idea of gaming on a 100-inch screen, take a look at these two short throw projectors. Benq and Optoma make it possible for you to enjoy the big screen experience without the limits of a monitor or TV. Let’s take a closer look at both projectors to see which one will be the best for you. 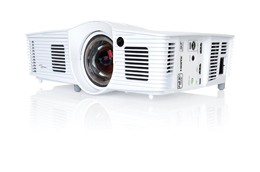 The Optoma GT1080 short throw projector is designed for gamers who want the best big screen they can get for gaming in a small room. It uses Digital Light Projection instead of LCOS or LCD technology. This provides a bright image with a high pixel count that handles motion well.

On the downside, sometimes DLP projectors have a bit of a rainbow effect. While users of the Optoma GT1080 aren’t reporting much trouble with the rainbow effect, the Benq W1080ST seems to suffer this problem more often. It happens most when there are fast movements on-screen, especially when the camera swings to focus on a new area.

The Optoma GT1080 has received a number of rave reviews for its crisp and beautiful display. It can project a screen size of 111 inches diagonal from 4 feet away, or 166 inches from 6 feet away. If you place it in Gaming Mode, you’ll get maximum contrast and coloration with a tiny 14 millisecond lag time and a refresh rate of up to 144Hz. That might be better than your desktop monitor can give you. The excellent image quality means you can sit close without noticing lots of pixelation.

If you play a game that’s produced in real 1080p resolution, that’s what you’ll see on the screen. The Optoma can also scale up 720p video and games, but the result isn’t as amazing. With the two HDMI ports, you can hook up both a PC and a gaming console, or some other combination of devices.

Another bonus of the Optoma GT1080 is its built-in 10W speaker. While it can’t replace an external surround sound system, it’s powerful for such a compact projector. There is a 3.5mm audio out jack to let you connect other speakers or headphones.

While this projector doesn’t come with 3D glasses, you can purchase them separately. In the box, you’ll find a lens cap, carrying case, HDMI cable, remote control, and power cord. 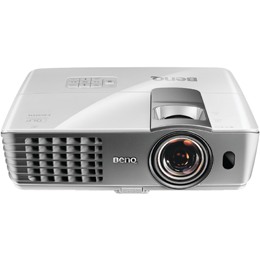 The BenQ W1080ST DLP projector gives a bright image even in a moderately-lit room. Unlike the Optoma projector that is designed mainly for gaming, the BenQ does a good job of displaying a wide range of video input, from movies and TV to computer desktops.

It’s compatible with various resolutions, from 480i up to 1080p. The picture modes like Dynamic, Cinema, and the three User-Customized settings let you choose the best display style for your purpose. The onboard 10W mono speaker does an adequate job of reproducing sound, but you’ll probably want to add other speakers for immersive gaming.

Unfortunately, BenQ’s W1080ST has received a few reviews complaining about rainbow effects during fast-moving scenes or 3D videos. Some users are more sensitive to these phenomena than others are. (Since the BenQ doesn’t come with 3D glasses in the box, you’ll need to purchase them separately to enjoy 3D games or films.)

If you’re shopping for a short throw projector for general purpose use, the BenQ W1080ST might be the better deal for you. It’s a good all-around projector, but it can’t keep up with the Optoma GT1080 when it comes to gaming.

If you want a DLP projector for 1080p gaming on a large screen, the Optoma GT1080 is probably the better choice. It has a brighter display with better contrast and fewer reports of rainbow effects.