Screen space and high resolution are essential for enjoying computers now. Monitors serve as televisions and gaming console displays, too. As you shop for the best screen, you’ll notice there are so many similar ones for sale. But we’re narrowing down the competition to help.

We reviewed two of the top 34-inch monitors so you can choose the best one for your home or office. 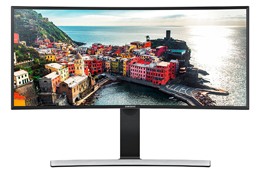 Samsung’s S34E790C monitor is an excellent addition to their lineup. It sports a curved screen for immersive viewing in WQHD resolution. That means it displays 3440 x 1440 definition in a 21:9 aspect ratio. Gaming and videos are gorgeous on this panoramic display.

What does a WQHD resolution mean? It’s two and a half times the definition of full HD, or 2K. This makes for a bright, clear picture with rich sharp, colors and high contrast. The wide viewing angle measures 178 degrees so you can see the image from the middle or the sides of the monitor.

The Samsung S34E790C offers Picture-in-Picture technology like many televisions have. You can view another video source, even at a lower definition, in a smaller window while you do work on the rest of the screen. It also has Picture-by-Picture technology that lets you connect two separate computers to the same monitor and split the screen to see both displays at once.

While this monitor has a 60Hz refresh rate, it’s easy on the eyes because it’s flicker-free. When you play games, the Game Mode keeps up with the action by rapidly adjusting colors and contrast. And since there are speakers built into the screen, you don’t need headphones or external audio amplification to enjoy it right out of the box.

It’s easy to connect multiple devices because the S34E790C has two HDMI ports plus PC In, DisplayPort In, four USB 3.0 ports, and audio out. You can leave it on its stand and adjust the height and tilt, or mount it on the wall. 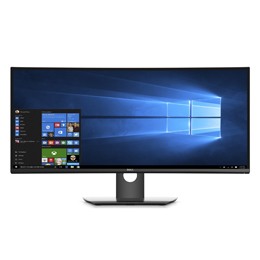 The Dell U3417W 34-inch monitor is curved like the Samsung model we reviewed above. The curvature enhances the immersive viewing experience for gaming and videos. Also like the Samsung, the Dell has full WQHD resolution, 21:9 aspect ratio, and a 178-degree viewing angle. It’s factory-calibrated to 99% sRGB for crisp color reproduction. In fact, the U3417W’s screen can show you over 1 billion colors.

Also like the Samsung, the Dell U3417W has a flicker-free image for less eye strain and fatigue. Dell’s own ComfortView technology cuts down on blue light without harming the colors on-screen. Less blue light means better sleep at night after you shut down the monitor to go to bed.

With the two built-in 9W speakers, you may not want to hook up external sound through the audio out port. But you can connect a variety of other devices with the HDMI, MHL, DisplayPort, mini DisplayPort, and 6 USB 3.0 ports.

You can also connect two PCs at once and display both of them onscreen. One keyboard and one mouse is enough to control both computers. There are also Picture-in-Picture and Picture-by-Picture options, plus Dell’s own Easy Arrange feature.

The Easy Arrange lets you drag and drop programs where you want them. Put your spreadsheet on the left, word-processor on the right, and last year’s vacation video in the middle. You don’t need a special video card or a high-powered PC to get a lot of work done now.

The stand that accompanies this monitor allows you to adjust the screen height as well as tilt and swivel. It removes for easy wall-mounting, too.

There’s not much difference between these two monitors. Dell’s ComfortView technology and Easy Arrange feature might sell you on the U3417W. You’d also get a built-in mini DisplayPort and USB hub with both upstream and downstream ports.

On the other hand, you may be a fan of Samsung products. Their S34E790C is a popular monitor with a sleek design. It’s a tough decision between these two and it might simply come down to price.