As an Amazon Associate I earn from qualifying purchases.
Home
Complete Tripod Reviews
Sirui T-005 vs T-005X vs T-025X Review

A tripod is essential for a serious photographer, especially for low-light photography. Tripods make it possible to take long exposures with greater clarity. They’re even better than just using the stabilizing features on modern cameras. Unfortunately, tripods can also be a pain to haul around.

Sirui comes to the rescue with these three travel tripods in a price range that won’t break the bank. Sirui is a newer photographic equipment company founded in 2001. They’ve established a good reputation, even going so far as to get ISO9001/ISO140001 certified to show they care about the environment. Let’s look at three of their lightweight travel tripods and see which one will help you get the great shots you want. 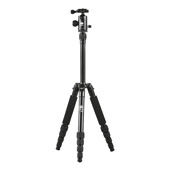 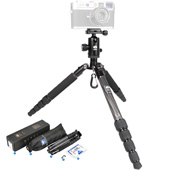 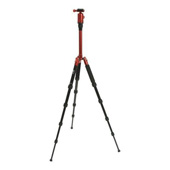 The Sirui T-005 weighs only 1.8 pounds. That’s less than a quart of milk! It also folds down to 11.8 inches, just under a foot in length. When the legs’ five sections and the center post are all fully extended it reaches 51.4 inches. The head gives it another 3.26 inches. This is about 4 feet 5 inches in height so this tripod might not be comfortable for tall people to use because they’ll have to stoop to look through the viewfinder.

The T-005 comes with a C-10 ball head that has two separate knobs for pan and tilt. The plate is Arca-compatible for quick mounting and release. A few users have complained that the screw needs to be tightened every so often.The head mount thread is ¼” – 20.

Two of the legs have “leg-warmers,” or foam grips, which are a nice touch when the tripod’s being used in cold weather. Without the center column, or post, the tripod stands 44.5 (or 48.6 with the ball head) inches tall. The legs twist-lock into place and have rubber feet for stability. The feet are not removable. To deal with uneven ground, the T-005 can angle its legs to 23, 52, and 80 degrees. (These angles vary from the angles available to the other two tripods.)

Now for a couple of caveats: First, Sirui reminds users that this is a lightweight tripod designed for mirrorless and compact cameras. This is not intended to support DSLRs with large lenses, even though it’s rated to handle up to 8.8 pounds. Second, the purpose of a tripod is to have a stable platform. Raising the center column makes this a monopod on top of a tripod, so expect shakiness in windy conditions.

The Sirui T-005X is the next generation, or newer version of the T-005. It’s made of aluminum like the T-005 and folds up to the same compact size of under a foot in length. It weighs the same at under two pounds. It supports up to 8.8 pounds. The total extended height is also the same at 51.4 inches, or 54.6 inches with the head, still not the best for tall photographers. If so much is the same between the T-005 and the T-005X, then what is the difference?

The T-005X can angle each one of its legs independently to 20, 60, and 78 degrees to handle uneven terrain. It can fold down to a minimum height of just 4.1 inches, great for tabletops and macro photography, and the center post is removable.

Another difference is the ball head. It is the C-10X, which is the improved version of the C-10 that’s on the T-005 tripod. The C-10X has arubberized plate for better grip along with the Arca-style clamp. There are three slots for ¼” screws just in case the camera doesn’t have its tripod mount in the middle. The pan and tilt knobs are all metal on the C-10X and the pan function is 360 degrees.

The Sirui T-025X is the higher end tripod of these three simply because it’s made of carbon fiber, not aluminum. Carbon fiber is lighter in weight but stronger than aluminum and is typically seen in the high-end tripods used by professionals. The T-025X weighs less than the other two tripods at only 1.5 pounds but it is the same length when folded.

The T-025X also has five sections in each leg as well as a center post that extends above them. The center post is removable. The ball head is the C-10X like that on the T-005X. It has a 90-degree tilt, 360-degree pan, and a double-bevel lock with metal knobs. The plate is rubberized with an Arca-style clamp.

The three legs can be adjusted independently to deal with uneven terrain. They have three angle positions at 20, 60, and 78 degrees just like the T-005X. When extended, they twist-lock into place.

The maximum extended height including the center column and ball head is 54.6 inches. If the center post is retracted or removed, the legs stand 21.1 inches tall. The minimum tripod height is 4.1 inches, so it can be placed on a tabletop.

Since the T-025X is so lightweight it may be shaky in windy conditions. Sirui included a carabiner underneath where the user can hang a weight to anchor the tripod if needed.

Keep in mind that these are lightweight travel tripods. If you are a pro user who needs a tripod for regular use and you have heavy DSLR equipment, these are not the tripods you seek. Also, remember that these tripods only stand 4-1/2 feet in height. Most photographers prefer a tripod that at least reaches to their jaw so that once they mount the camera they can look without stooping.

Otherwise, these are great for travelers and people with compact cameras. If weight is an issue, the T-025X is especially light at only 1.5 pounds. It’s also rated for heavier equipment up to 13.2 pounds.

The T-005 and T-005X are both aluminum and slightly heavier to carry. The main differences between these two lie in the ball head and in the available leg angles. The C-10X ball head on the T-005X is more advanced than the C-10 on the T-005. The two tripods only vary by a few degrees in the angles their legs can lock into so it’s probably not enough to matter.Anecdotal evidence shows that there are a few complaints about the ball head screw loosening on the T-005 but not on the T-005X. Personally, if there weren’t a large difference in price, I’d go for the second generation T-005X because it seems Sirui listened to those complaints and solved the problem.